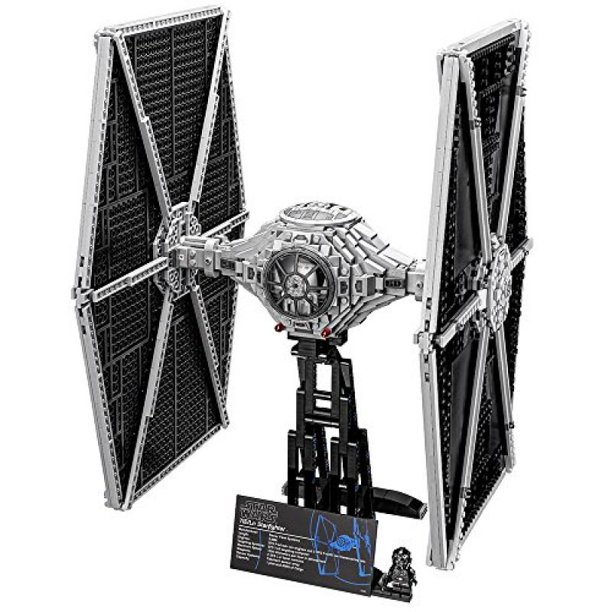 Or get it by Mon, Nov 2 with faster delivery 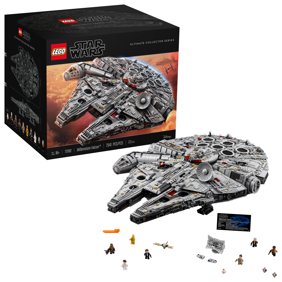 We aim to show you accurate product information. Manufacturers, suppliers and others provide what you see here, and we have not verified it.
[P].[amz_title]lego star wars tie fighter 75095 star wars toy

This set is GIGANTIC!!! I read the descriptions prior to ordering and I knew how big it was. That being said you don't truly understand how large it is until you are putting this thing together. Like the other Ultimate Collector Series this comes with a nice display stand that swivels. Lego states that this is very sturdy and is also designed to be played with. Although I guess it could be played with....I'm 32 and this thing is HEAVY. In my opinion this is meant for a Star Wars fan to have a fun day building and put it on display. After the detail of this set I will be ordering the Slave 1 next.

Reviewed by RuttaggerRuttagger
Written by a walmart.ca customer.
Helpful?
Average Rating:(5.0)out of 5 stars

There coming in too fast....

This set consists of 17 Bags number 1-12 As you expect from this design there are 2 completely identical pieces which I recommend 100% to build at the same time, which the manual helps you do this...which is perfect!! The build is great fun and once completed looks absolutely amazing. The design is Fantastic, very sturdy and very well put together...totally recommend if you collect UCS Star Wars Sets!! Lets hope they have a 16+ 5000 piece in the pipeline to replace the Super Star Destroyer for xmas!!

My first 'real' kit as an adult and I loved it from start to finish. I played a lot as a kid, moved on, but through a friend got reacquainted with this wonderous world of bricks. This set is huge! Once completed this will need a descent space to sit and be admired. It was a great build with nifty little tricks to create a certain connection or detail to make it more worthwhile. The instructions were very clear, I had no problems whatsoever to complete the set. It comes with one minifigure of the pilot with nice details on the helmet and torso. A number of stickers are included as well. They complement the build with little details of things like hinges and also the cockpit interior. It's a beautiful set that I highly recommend for serious builders. The size and level of detail are stunning and well worth the price.

I ordered this set mostly because of its size! It really does take up a lot of space, in a good way. It presents itself very nicely and I can't find any weak points in its design. This set is perfect for any Star Wars fan or LEGO enthusiast. I was incredibly impressed with the designers of this set as they implemented a new way to attach the hexagonal wings to the main body making the whole structure incredibly rigid. The stand is also well structured so that the TIE Fighter can be displayed on a slight angle giving it a cool mid-flight display. Of course, as it is a LEGO Star Wars set, its piece/price ratio is poor and the build is quite repetitive as you just have to build every part twice. However, the display aspect alone is worth the high price tag and it outshines most of my other sets. It remains one of my favourite LEGO Star Wars sets to date.

First time review of any Lego product, so here goes. This was my first UCS purchase, and I was a bit hesitant at first. However, after ordering direct from Lego, and three days of working on it intermittently, I was very pleased when finished. My initial hesitation, based upon the box cover images, was that the cockpit ball looked a bit jagged, and not, well, ball-like. But in person, no longer a concern. It has that Lego look, so not a perfectly smooth sphere, but still a very good job in designing it. The top hatch and forward glass screen help to make your eyes see it as more round. The completed model is very solid and swooshable. It could probably handle some rough play, but for me as an adult, an occasional swoosh, and almost entirely it will be on the stand. I was impressed with how the panels connected to the body. No technic pins, not that I would have minded, but the hinged piece with another inserted to fill in the gap. These things aren't going anywhere, and are firmly attached. The side solar panels are imposing, giving a true feel of how large they are in relation to the cockpit. The detail, like the exterior central hub on the panel, is also cool. I took my time over the 9 hours, as I like to make sure all the pieces are nice and firmly attached, and I take my time with the stickers. Repetitive, as others have said? Perhaps, but that's due to the basic TIE design. For me, the finished product is what matters the most. There were enough subtleties to how some of the elements came together that relieved some of the repetitiveness, and admiring the solid connection points to the panels, I appreciated that. I did not attach the red arrow stickers. I'm not sure why those were included, as I've seen no pictures of 'real' TIEs with those, and in my view, those would have detracted from the final appearance. Also, I think there may have been a mistake on Page 66 how the manual shows the orientation of the sticker that is ultimately beneath the glass viewport, closest to the red laser cannons. The orientation shown in the manual is flipped 180 degrees from what the design on both the box cover and when comparing it to the schematics in the manual's introduction, which also match the boxes orientation,. I used the box's orientation instead of what Page 66 showed. Minor, but I wanted to point that out. The exclusive design minifig I really like, and I may have gotten lucky, but I received two pistols in my set. The silver line printing on his helmet, and the patches on the arms are nice touches. I have the complete TIE+stand next to the 75114 First Order Stormtrooper, which looks cool, and makes me hope Lego makes a buildable TIE Pilot, so I can put them side-by-side. From an adult perspective, this was worth the money spent, and to actually have such an imposing model now in my living room, would have been a dream as a kid 30+ years ago. My uploaded image includes the Star Destroyer and new Force Awakens Millenium Falcon, as a size reference.

When I first bought this set (which was a crazy quick buy) I was unsure about the set having purchasing from a lego store and now looking at dimensions at all I believed it was going to be a small set with a slightly bigger size to the older tie/ln starfighters. However this set blew my mind it was so big and sits grandly on a sturdy technic stand. When I look back in realise this is a crazy good buy and is truly amazing. Would not recommend this to be a set to play with because of its size but would recommend this to anyone who wold use this set for display.

A gargantuan set when complete, but worth every square centimeter. The main "eyeball" has a nicely detailed cockpit at minifigure scale, so the included pilot can be sat inside as well as any other minifigures; playing with the set as a toy is great. The solar panels, too, look great and are significantly stronger than they appear. Their strength is unnecessary for display use, however, as the stand is functional and cleverly designed so as to allow full view of the ship. This set is a great display piece and just as good of a toy, and would be a good addition to any builder's collection.

I have been building Lego for some years now, but the current UCS examples are great. The quality of the kits and their representations of the movie items are also getting better.

The TIE fighter build was rather straight forward, and I also got my daughter involved in some of the sections. The detailing was excellent, right down to the cockpit.

The bags were well set out and allowed for an ease of transition between elements.

Looking forward to some more great UCS models in 2017.

This set is HUGE when finished and looks GREAT. Other pros: exclusive minifigure, some nice big plates, several large printed pieces, learned a few new building techniques. As others have said the build is repetitive but I actually didn't mind that and I enjoyed the build. Cons: build was very easy - almost too easy. As an AFOL the build is the main reason I buy LEGO and it took just under 3 hours to finish the model and I took my time. Given the short build time the price also seems too high - but the finished display looks amazing so I do feel that balances out the high price so what.

I'll start off with my only three complaints for this set. First, stickers. Need I say more? Second, the price. It does have more pieces than the X-wing at the same price, however the Slave-1 has many more pieces than both, also at the same price. $0.10 a piece seems reasonable, so this set should be more in the $160.00-$170.00 range, like the R2-D2 set was. And lastly, the rear viewport is too square, the actual fighter has a more rounded rear. The rest of the build has such great detail, but this one parts differs too much from the real thing. Now for the fun part: the build was fantastic. The methods used on this set were nothing short of pure genius, and I was awestruck building it. I also greatly appreciate that there are almost no technical pieces, I don't enjoy building sets with too many technical pieces. Even though there aren't many technical pieces, this set is very sturdy, and that's where the genius design comes in. The solar panel "wings" are huge and heavy, yet very secure on the set without a *single* technical piece. You really just have to build this set yourself to appreciate it.

Get specific details about this product from customers who own it.